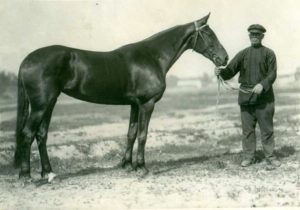 In 1927, a young but already world-known rider Mikhailo Stasenko gained confident victory at the Moscow Hippodrome. He crossed the finish line and set a new record, riding the mare Hilde. The history of this one can not fit in a few lines. Glory and horrible ordeals of the World II have combined in her fate.

Dibrivka stud farm, founded in 1888 by Prince Dmitry Romanov, raised the prestige of our breeders in the eyes of the foreign fan of horse. And achievements on the racetrack of the stud farm riders cemented the reputation of Dibrivka as a equestrian sport leader.

However, 1917 brought its changes: Dibrivka came to ruin. There were Bolsheviks, and troops of Petliura and Makhno – all of them needed good horses.

However, some time later the plant managed to recover from difficulties: workers-enthusiasts not only gathered bit by bit breeding stallions and mares, survivors of civil war, but in a short time managed to breed a brilliant galaxy of horses, the record-holders. One champion was trotter Hildeyets. To Dibrivka stud farm he was taken a two years old “living skeleton”: at the peasants workers exchanged barely alive horse for two wagons of straw. A year later, this racehorse with rider Mikhailo Stasenko won “Derby”.

In 1939 at the Moscow Hippodrome, where were held All-union competition for the traditional prize “Derby”, Hilde, daughter of Hildeyets, rashed 1600 meters in 2 minutes and 5 seconds. It was the highest speed! Her father overcame this distance by 2 minutes 11 seconds in a horseback racing in Chicago.

In 1941, because of the approaching front line, the stud-horses of Dibrivka stud farm were evacuated to the rear. When the last herd, where was Hilde also, was approaching the bridge over the Don, it was by the enemy bomb. The horses dispersed through the steppe, here they were cought by the Germans. Hilde was transported to the stables of Berlin racecourse. Winter and spring German stablemen tried to tame the mare. But Hilde was constantly trying to hit or bite strangers. Then the stableman locked door of stables, climbed on a metal fence and flog her.
In Berlin stable Hilde was kept for a reason: they were preparing her for the horse riding on the racetrack of German capital. To this competition came even Hitler with his retinue. Fuhrer even created a personal prize: money, a laurel wreath, gilt trappings for horses were waiting for the winners.

Already in the first seconds Hilde was racing far ahead of all horses. Hitler applauded, not hiding fun. But when to the finish line remained some hundred meters, there occured unpredictable: Hilde suddenly stopped, abruptly raised the hind legs and struck with full force on the shafts and got free of rider’s reins, who appeared under her feet. No one had time to recover, as Hilde neighing out loudly rushed to the iron fence, flew over it and, being on the streets of Berlin, rushed through the city galloping. Holiday was frustrated. Some of Nazi leaders were just eager to shoot defiant animal. But Hitler ordered: “Catch, catch, return! We should get offsprings of hers!” 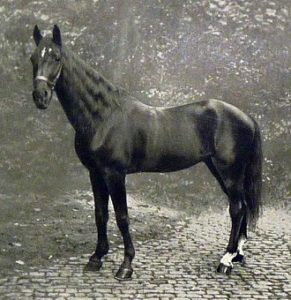 Hilde raced with the speed with which has never ran a race on tracks in the hippodromes of Dibrivka, Moscow, London, Paris and Berlin. She felt like strained reins of her rider Mikhailo Stasenko were just behind her back, heard the shouts in the stands of racecourse. A short distance away like a black beetle was moving a truck, and plane was circling in the sky. The chase continued.

The Germans organized the ambush, set traps, streched nets, and all was in vain: Hilde felt danger and easily avoided it. In a week she has reached the Dnieper, and day later was already at the native stables in Dibrivka. Grass, flowers, trees, sky, air – everything here was her, native. Tired Hilde walked in, immediately headed to her stall and instantly fell asleep. But even native land failed to force back the enemies: pursuers were waiting for her. Taking the net, they climbed on stable beams and threw it right upon the back of the animal. Hilde strived to escape, but after the first on the her fell the second net, then third. Recalcitrant mare struggled fiercely, and with every move she further entangled herself in the nets, as in the cobweb.

In mid-July 1942 Hilde on the train was again delivered from Poltava to Berlin. Group of fascists who caught restive Runaway, was served the rewards. But when she found herself back in captivity, Hilde did not obey, the spirit of freedom has not left her. On the contrary: hatred of the Nazis just added Hilde the forces. Within a month she killed two captors. The first horseman killed was too imprudent, he approached too close to the mare and received a fatal hit into the chest. When one of the riders dared to bring Hilde on the treadmill, the captive rose on hind legs, fell on him and strangled. After this accident Nazis left the attempts to tame the restive mare. The only way out of this situation was to get from Hilde the progeny. Now not let her escape or harm anyone, they put out her eyes. 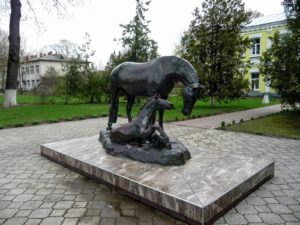 May 3, 1945 a young trooper, who was equerry at Dibrivska stud farm, Hryhory Mikhailovych Safronyuk waged battles in the streets of Berlin. When the battle ended in the evening, Hryhory with his tank crew decided to finally relax. In the depth of one square Safronyuk saw herd of horses. In the mare standing apart from the others, sadly bowed her head, he recognized the pupil.

– Yes it her… This is our Hilde! – Not believing his eyes, shouted joyously Safronyuk.

Everybody stood still. Sharply raising the head, Hilde took a few steps and stopped. Hryhory ran to her, embraced by the neck and began stroking, kissing. Suddenly grew numb: Hilde had no eyes. 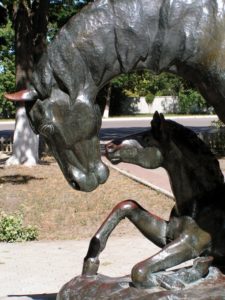 Fine autumn day 1945 Hilde returned to Dibrivka with herd of other horses, which were taken during the occupation of Germany. The herd was chased by the boys from Dibrivka, who were also forcibly brought to Germany for work. All the village came out to meet people and horses. Among them was the rider Mikhailo Stasenko. The same, who set a world, two European Union and many records of equestrian competitions. Many records he won with Hilde. He immediately recognized her in the herd.

– I am here, Hilde!- holding back the excitement, said Mikhailo Dmytrovych.

Mare stopped abruptly turned her head towards him and, leaving the herd, went to Stasenko. She went very carefully, pausing after each step. This meeting was then photographed by the village amateur photographer.
Many years have passed since then. But now in the square in front of the administration building of Dibrivka stud farm stands large bronze monument with a beautiful mare with a foal. They say that the villagers believe that this sculpture is a monument to Hilde. And it is good that they think so, because there can be no doubt that her devotion won the right to be perpetuated and for good memories.