Ivan Datsenko born 1918 in the village of Chernechy Yar, Dykanka county of former Russian Empire (now, Ukraine). He attended a local secondary school. He graduated from the veterinary college in village of Pysarevshchina in 1937. In the same year he was drafted to serve in the Red Army. In 1940 he graduated from Orenburg Aviation School. 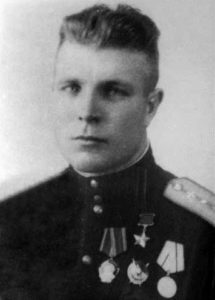 During WWII he served in the long-range bomber aircraft. Joined the Communist Party of the Soviet Union in 1940. Guard Senior Lieutenant I. Datsenko was a flight commander of the 10th Guard Long-Range Aviation Regiment Decorated with the Order of the Red Banner while bravely fighting against the Nazi invaders from the first days of the Great Patriotic War. He used to log missions to bomb military-industrial targets deep in the enemy’s rear.

On June 22, 1942 I. Datsenko with his flight got the task to crush an enemy airfield in Orel. The bombers destroyed the targets in several entries. When returning to the base Datsenko’s bomber was hit with a shell and it caught fire. In this complicated situation, Ivan showed extraordinary courage and endurance. He directed the plane to the front line and did his best to save the crew. He was the last himself to leave the aircraft.

In early August 1943, Guard Senior Lieutenant I. Datsenko conducted over 200 combat sorties. After his recovering from the injury he was back in the service. The Order of the Red Banner and medals were awarded to him. He was awarded the title of Hero of the Soviet Union on September 18, 1943.

A book titled For Bravery and Courage published 1973 comprises a list of all the Heroes of the Soviet Union from Poltava land (233 persons) with their operational records and has the statement in the page 105 as follows: “On April 18, 1944 the crew led by I. Datsenko has bombed Lviv-II railway station, that a lot of manpower and equipment of the enemy was concentrated at. During the combat task the fearless “falcon” has dead a hero’s death.” 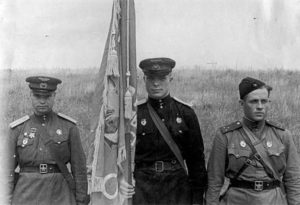 Everyone believed so. He was worshiped as a hero in the village of Chernechy Yar. Young Pioneer Brigade of the local school was named after him. Certificate of the Hero of the Soviet Union was passed to the Pysarevshchina Technical School. Inhabitants of the village had intended to give the name of I. Datsenko to one of the streets and even to call the village after him as well as to set up a monument to him.

Well said but not well done as I believe. The higher institutions of the State gave a secret order to stop commemorating I. Datsenko. The cause of the prohibition became known only after thirty years. The curtain of secrecy opened little by little.

In the early 80’s, a folk singer and dancer of Chechen origin Mahmud Esambaev gave a small interview for the magazine “Soviet Screen” which he told in he had met the chief of a Mohawk tribe who came from Ukraine while his staying in Canada 1967 as part of the Soviet delegation. But Esambaev did not call the chief’s name.

A few years later a correspondent of the Trud newspaper met Mahmud Esambaev and inquired further about the case in Canada: his meeting of the mysterious chief. At that time the artist called the name and told where he came from. It turned out to be from town of Dykanka situated not far from Poltava. That essay published became known to the public in the USSR. 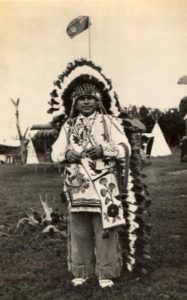 The newspaper article was kept by Olga Vasylivna Ruban, I. Datsenko’s niece (his sister Alexandra’s daughter).  Years have passed but Olga V. Ruban has been still interested in the fate of his uncle Ivan Datsenko. In 2001 she sought assistance of the Russian TV Program “Wait for me” known to everybody.

TV presenters Igor Kvasha and Masha Shukshina decided to check whether there was the fact and find witnesses or participants in those distant events if possible.  Since 2001 there were several TV broadcasts within two years.

The search resulted in finding more than 20 persons who knew I. Datsenko due to the service or saw him in Canada.

It was found that 1967 the Soviet delegation of Communist party workers and those of culture headed by a member of the Central Committee A. Poliansky had visited the World Expo 67 in Montreal (Canada). The People’s Artist Mahmud Esambaev also was as part of the delegation. He showed his best “dance of fire” at some concert, and his temperament conquered the hearts of spectators.

Enchanted with his masterly skill, Canadian Prime Minister Lester Pearson asked Mahmud what he would like to obtain as a gift. The dancer replied: “I would like to see the way Indians here live and see their dances. The next day the Soviet delegation was invited to a reservation that a tribe of Indians from Mohawk tribal union lived in. 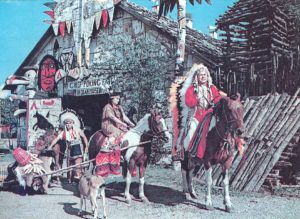 Together with the other guests Mahmud came into one of the largest wigwams and was fascinated by the way it was furnished: spears, tomahawks and other weapons. The tribal chief emerged: a tall, strong, handsome, still youngish Indian all coated and painted with tattoos and military colors. His eyebrows and hair were black. Although there were a necklace, tinsel and other decorations but these exotic clothes could not hide his military bearing. The chief’s head was decorated with motley feathers. There was his suite behind him. Esambaev spoked to the interpreter: “Tell the chief that he is very good-looking. Whereupon the chief replied in pure Ukrainian language: “How d’you do! Please come and see me in my room.”

Next the chief spoke Russian to the Soviet delegation, English to the translator and in his native language to their fellow country people.

The chief called for his wife and told her something then the table was served with halushka dumplings and Ukrainian vodka (because he knew beforehand that the Soviet delegation would come).

They drank and ate and the chief said: “do you know any Ukrainian songs?” And he raised himself with his beautiful baritone: “Rozpriahayte khloptsi koney ta liahaite spochivat…” (Guys unharness our horses and lye down to relax…). His wife, children and members of the delegation sang along. Someone asked: “Who are you?” The chief answered: “I am Ivan Datsenko from Poltava. The Indians gave a name Piercing Fire to their chief, its English name was John McKnober. 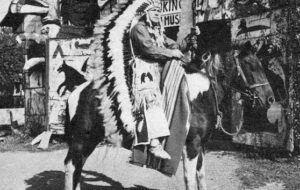 This was a professor of Montreal University who told to Esambaev that the Indian tribe chief Ivan Datsenko was not only native of the Soviet Union but also the Hero of the Soviet Union and pilot. At last the chief asked the delegation for sending the nice views of his beloved Ukraine and Poltava region.

At that time it was still too early to remember him to everybody at home in Ukraine. Here he was considered to be the enemy of the people and was to be banished to a concentration camp in Siberia if he returned home because the delegation included some KGB agents who told to the Soviet secret police top officers about him.

It turned out after the further investigation I. Datsenko has been not perished in the air fight near Lviv and taken prisoner by the Germans. In 1945 he escaped from the German imprisonment and got into the American occupation zone in Germany. As per the Potsdam agreement, all the Soviet prisoners were to be back the Soviet Union by the allies. Ivan avoided transferring him home and reached Canada in the way unknown to us. He was hired as a worker to do various work in the outskirts of Montreal there. He fell in love with a dark young squaw in one of its Indian settlements. At that time he was a young boy, too. She reciprocated his love. So Ivan requested the chief of the tribe to allow him to get married with her. The chief agreed providing the boy would become a member of the tribe, and after his death, the chief because he had no sons. After some hesitation, I. Datsenko agreed.

While meeting the delegation paid attention to how much respect the members of the tribe treated to their chief with. This meant that the chief did duties of the tribe supervisor good.

The editorial staff of “Wait for Me” TV program filed a request to Montreal 2002 to get assistance to help them find I. Datsenko or his descendants. Who responded was Mrs. Dale telling that she was a ten-year-old girl when she went to the Indian reservations where her mother guided foreign tour groups in the 70’s. 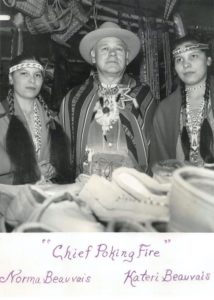 She knew the chief of that tribe in person, and told that he had had a son and his son had had two children. As of 2002 the chief and his son died and fates of I. Datsenko’s grandchildren were not known to her.  One of the members of the delegation told about the chief in some broadcast of TV program “Wait for me” while presenting a film about the tribe that the chief was portrayed in.

There was a question: Is that chief and Ivan Datsenko really one person?

For this purpose, the wartime photos of Ivan and a picture of the chief Datsenko were sent by Igor Kvasha to Moscow Institute for Forensic Examination. They found it was the same person.

So we are sure to know that our fellow countryman Ivan Datsenko was the chief of a Mohawk tribe in Canada. TV program “Wait for me” tried to find any descendants of the chief but it is very difficult nowadays because there are no Indian reservation in Canada since 90’s. They became equal citizens of Canada and could leave their homeland for all the world while looking for the better life.