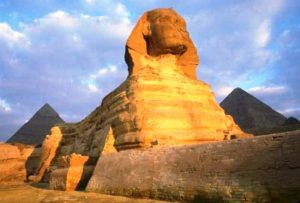 When you mention the word “pyramid”, there is probably the most common association with Egypt. At once you imagine hot arid terrain, endless dazzling yellow sand and scorching sun, laden camels with the attendants, rare palms and giant stone tetrahedrons rising above the plain, sometimes decorated with enigmatic Sphinx. Indeed, the most famous on the Earth are ancient Egyptian pyramids. However, the largest artificial constructions on the globe are no longer the symbol of a particular country. These man-made wonders are found in various parts of the world: in Egypt and China, Sudan and Peru, Tibet and Mexico … and even in Ukraine. 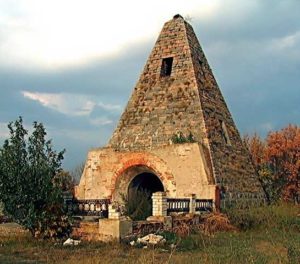 It is common knowledge that there are three pyramids in Europe, two of which are situated in Ukraine (one is in Rome), whereby both located in Poltava land. The first of them rises in the village of Komendantivka, Kobelyaky district, and the second one gives zest to the Palace and Park Complex of People’s Regional Historical Museum in the ancient village of Berezova Rudka, Pyriatyn district.

The higher is Komendantivka pyramid based on Mayan tribe tomb. The 15 meter high granite tetrahedron is higher and older than that of Berezova Rudka. Tsarist Russia’s navy officer, Alexander D. Bilevych undertook the construction of a tomb pyramid at his estate on the edge of the modern-day village of Komendantivka. Bilevych had participated in the Russo-Turkish War and fought in the Balkans. While being in the early 1860s in Egypt as part of a limited contingent of the Russian troops, he was influenced by the pharaonic tombs. The pyramid was made of blocks taken from a local granite quarry. 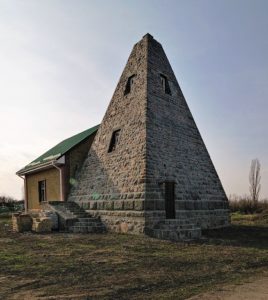 They were drown with ropes along wooden gutters up. The premature death of his beloved wife Sofia in the same year served as impetus to the construction. The mortar was based on blood of the animals just slain with adding egg whites. These components were not easy to procure, therefore the construction extended to 13 years.

The pyramid was meant as a church called after his wife deceased Sofia. Its underground tier comprised three burial chambers connected to each other with passages. The first floor housed the Orthodox church, while the second floor served as a bell. The building was topped with Orthodox cross. The pyramid planner was also buried there for the eternal rest in 1916.

The other pyramid stands in the center of the village of Berezova Rudka near the local grocery shop. The 10 meter high structure reminds Pharaoh shrine in miniature as it was built with a valid construction of Egyptian pyramids: the foundation is square, the side faces are clearly directed by the parties of the world. Inside, there is a cross-like vault with four niches. 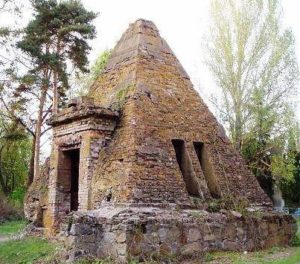 Once there was an altar with a large Orthodox cross memorable in the middle. Internal wall surfaces were painted with biblical characters on the one hand and with Egyptian style frescoes on the other. Outside, the initiator Zakrevsky told to cover the pyramid with cement to look like as if it was covered with plates. For the construction of the pyramid a hewn local brick and granite including materials brought from Africa were used. Three-storey building was the chapel, the entrance to which was guarded on the south side of Angel sculpture, which was actually a statue of winged Egyptian goddess of fertility and motherhood Isis brought from Egypt by the estate owner, the Ambassador of the Russian Empire in that country Ignaty Zakrevsky. When he died in 1906 in Egypt from heart attack his daughters embalmed thefather’s body and transported in Berezova Rudka to bury next to his parents in the family pyramid chapel.